We, as well as our customers, live an easier and in many ways more privileged life than many people in other parts of the world. Children, in particular, are subject to being the victims of wars and other disasters. We do not want to look away, but rather be committed and engaged. It is for this reason that we alternate our support for different child-related projects that urgently need assistance. Even if we are not able to solve all the problems, every bit counts and continuity sharpens the awareness. We hope that you agree with us.

We have donated € 166,000 in total so far. Learn more about each project we support below.

We are a supporting member of UNICEF. You, too, can support them with a periodical donation to make the world a better place for kids. 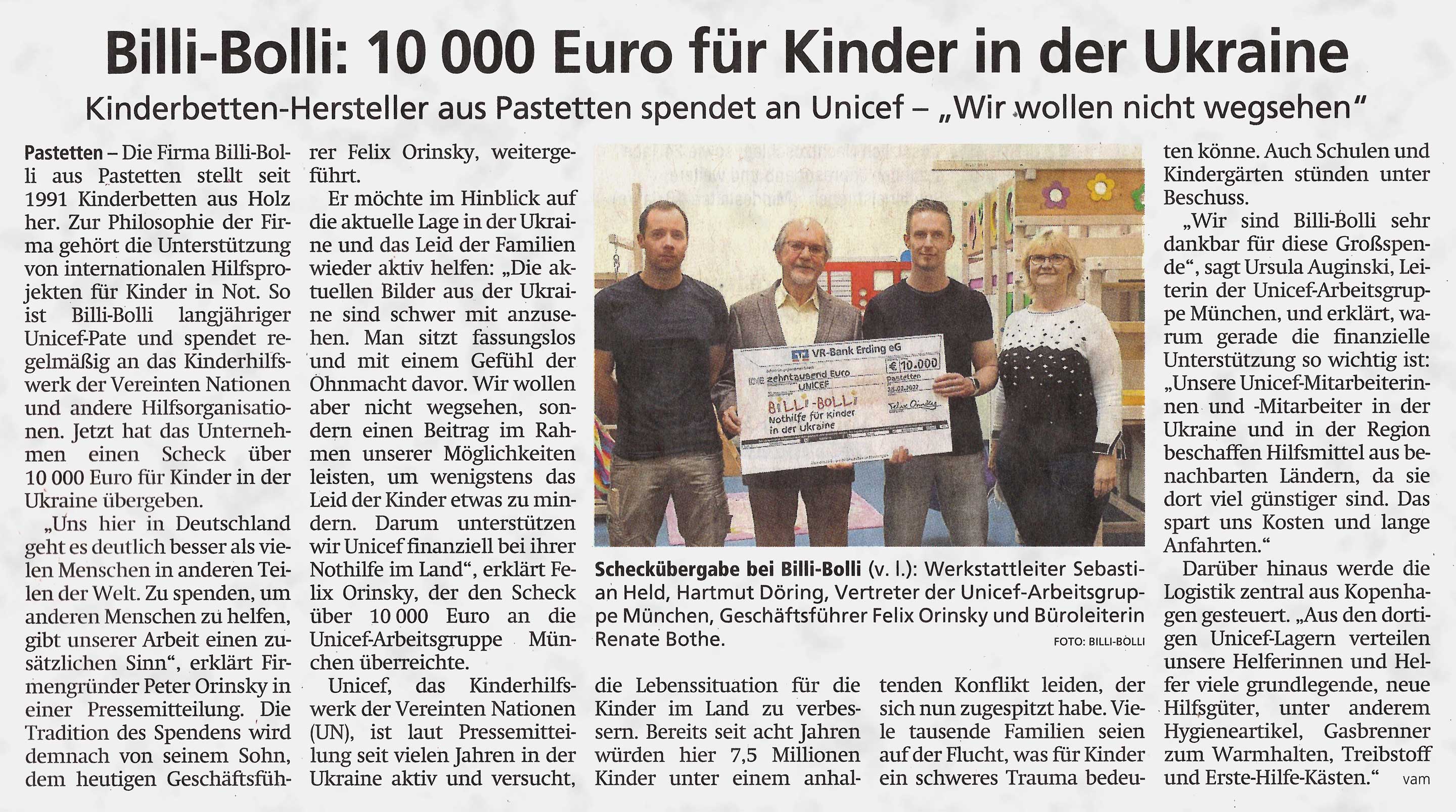 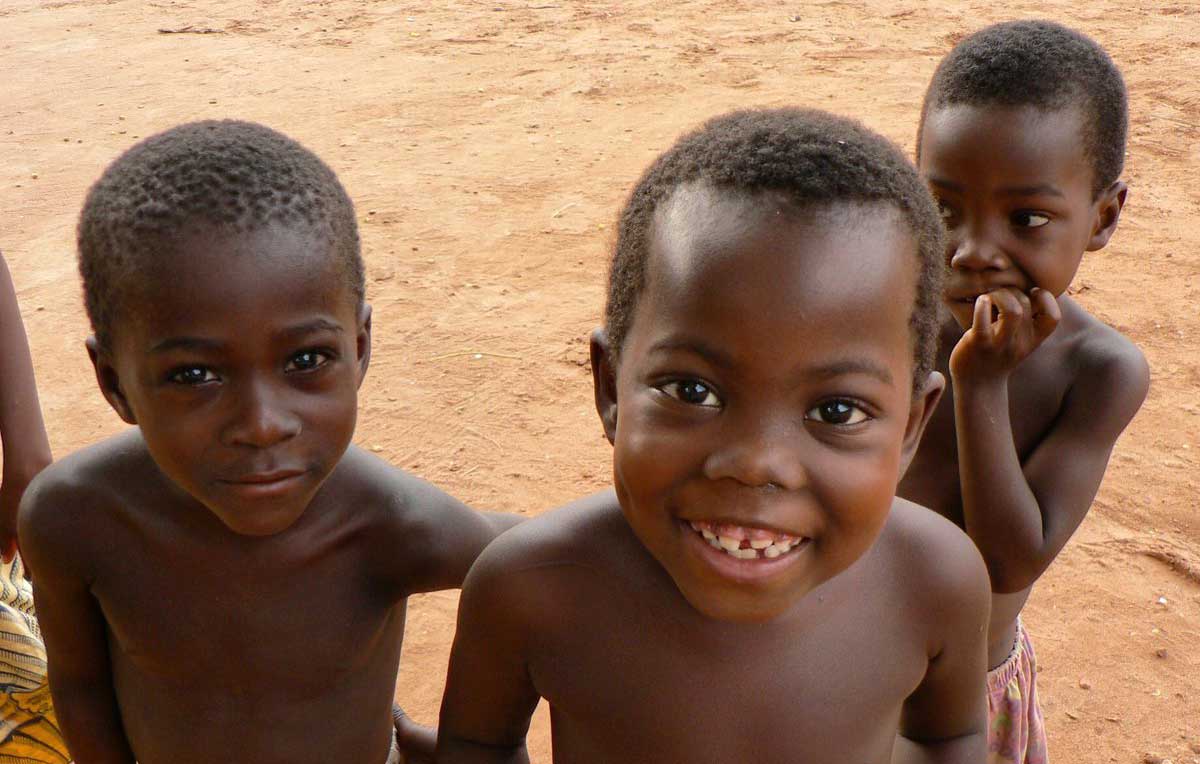 OAfrica was founded in Ghana in October 2002 with the aim of supporting orphans and children in need of protection in Ghana. They initially focused on improving the living conditions in orphanages and they also built a private orphanage. Today we know, however, that 90 % of the 4,500 children living in orphanages in Ghana – some under catastrophic conditions – are not actually orphans! Poor families send their children to orphanages as they consider this their only hope in securing their children’s survival. Therefore, OA believes that supporting the families and communities as the only sustainable way to give these children the chance of growing up within their families. The OA now focuses on the reintegration of children into their communities and on the support of their families. In addition, OA operates a separate children’s village in Ayenyah for those children who cannot return to their families because of personal fate and circumstances. 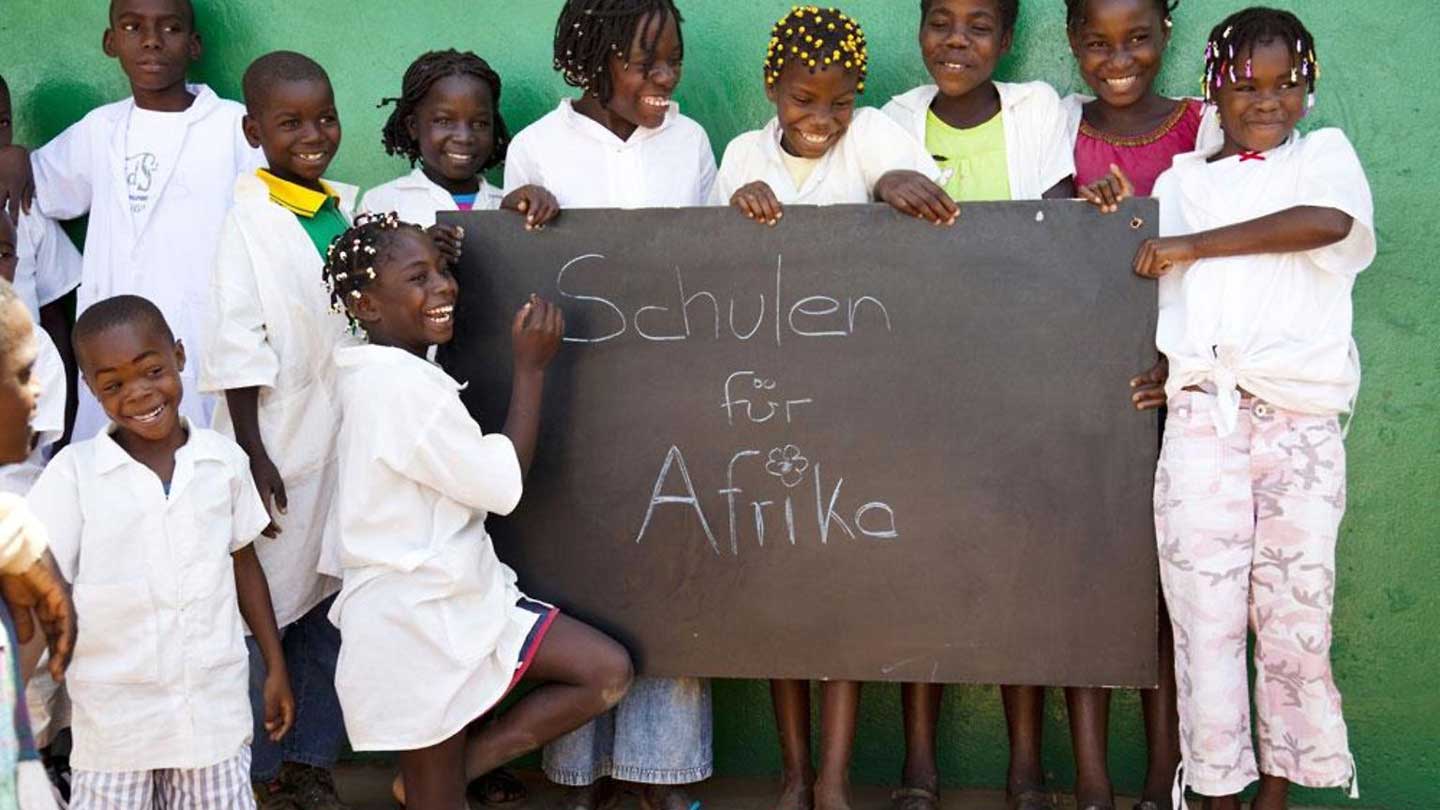 Every child has the right to education. But in African regions south of the Sahara, about one in three children is not in school, even to this day. Many families are too poor to pay for their children’s school supplies. Rural schools, in particular, are often overcrowded, poorly equipped or simply too far away. There is also a lack of qualified teachers. The AIDS epidemic exacerbates the situation. UNICEF, the Nelson Mandela Foundation and the Hamburg Society for the Promotion of Democracy and International Law, therefore, launched the campaign “Schools for Africa,” with the aim to ensure that children in altogether eleven African countries obtain a good, basic education. UNICEF supports the construction of additional classrooms, provides school supplies and trains teachers. The aim is for all schools to become “child-friendly”. 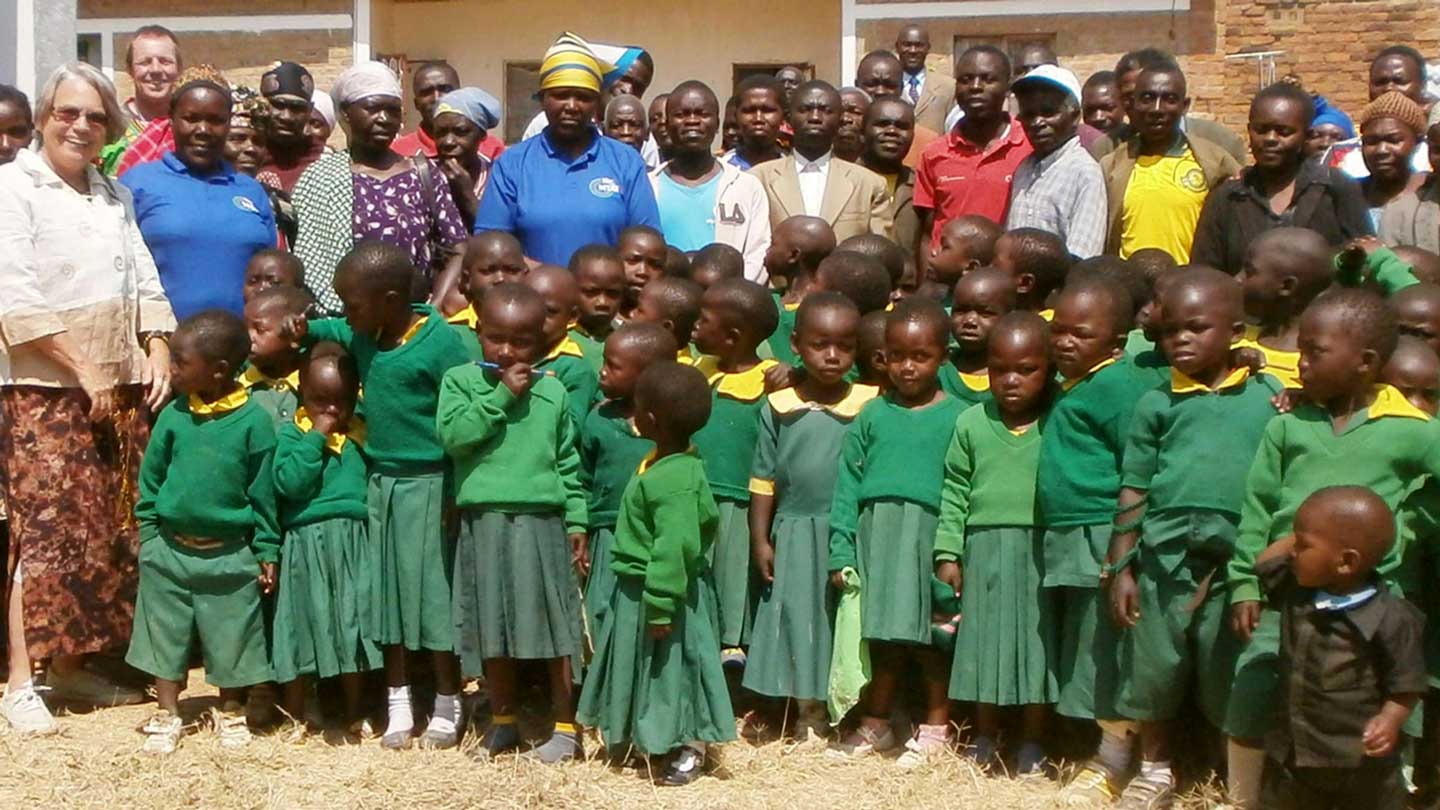 We have donated € 13,000 to the project “Miteinander Hoffnung pflanzen” (“Plant Hope Together”).

Palangavanu, located in southern Tanzania, is the sister community of the protestant church of our neighbouring village Markt Schwaben and embodies the principles of mutual giving, taking and learning. Tanzania is one of the poorest countries in the world, therefore it is supported in many ways through this project: AIDS education is carried out, tuition aid is provided and training is supported; students are supported with school materials and nurseries are built. In addition, goods such as clothing, vehicles, machines, materials or tools are collected and sent to Tanzania as needed. 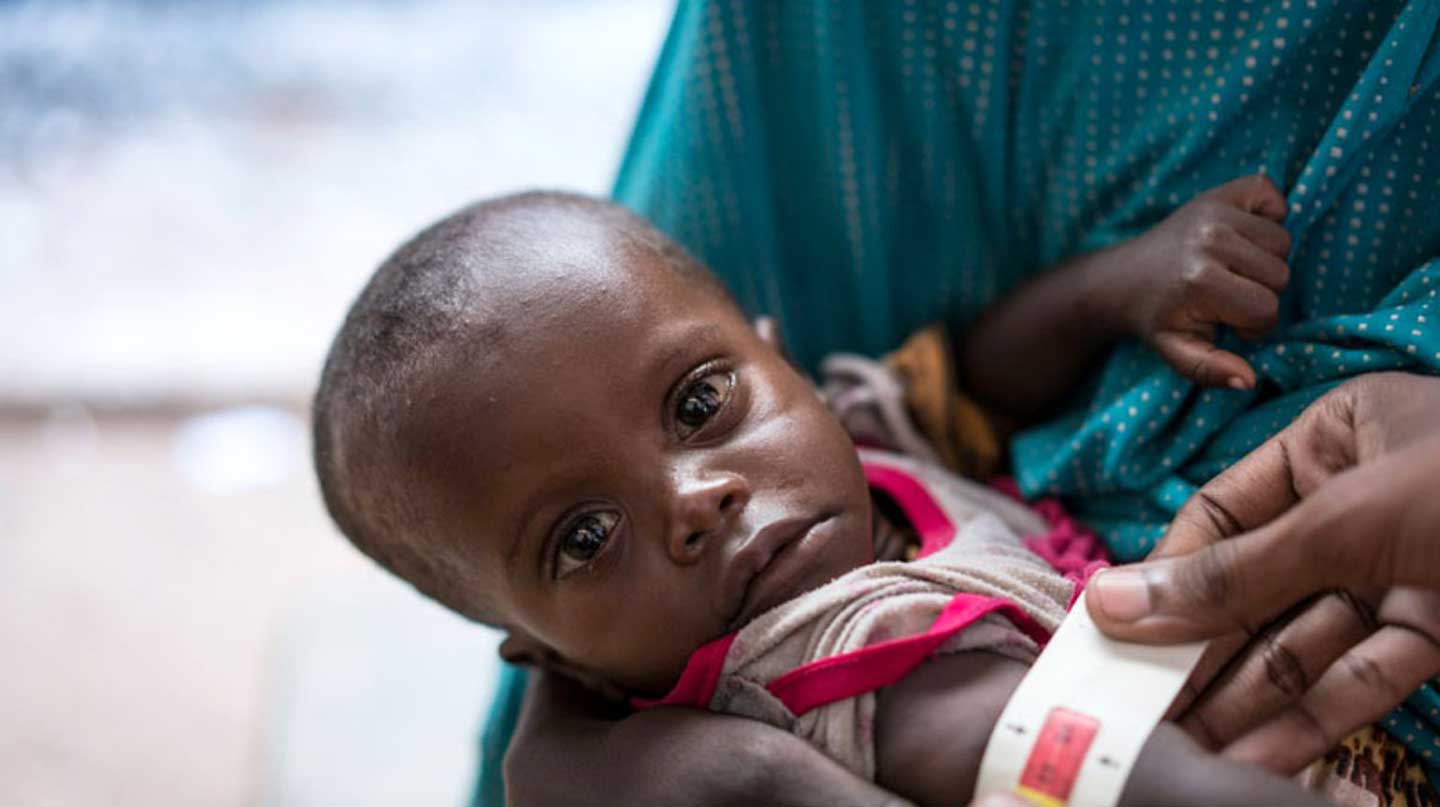 We have donated € 11,000 to UNICEF to fight famine in various African countries.

In East African countries like Madagascar, South Sudan, Ethiopia, Somalia or Nigeria, millions of people are malnourished. In some areas, one in three children is at risk of starvation. Extreme drought – the United Nations called it “one of the worst droughts in 60 years” –, rising food prices and decades of armed conflict escalated the situation in the Horn of Africa in 2011. UNICEF staff on the ground report of children eating grass, leaves and wood because they are so hungry. The focus of UNICEF’s humanitarian action continues to be the rapid care of severely malnourished children with therapeutic supplementary food and medicines, as well as providing families with access to clean drinking water, sanitation and hygiene. The aid is mainly organised via a network of local organisations together with some international partners. 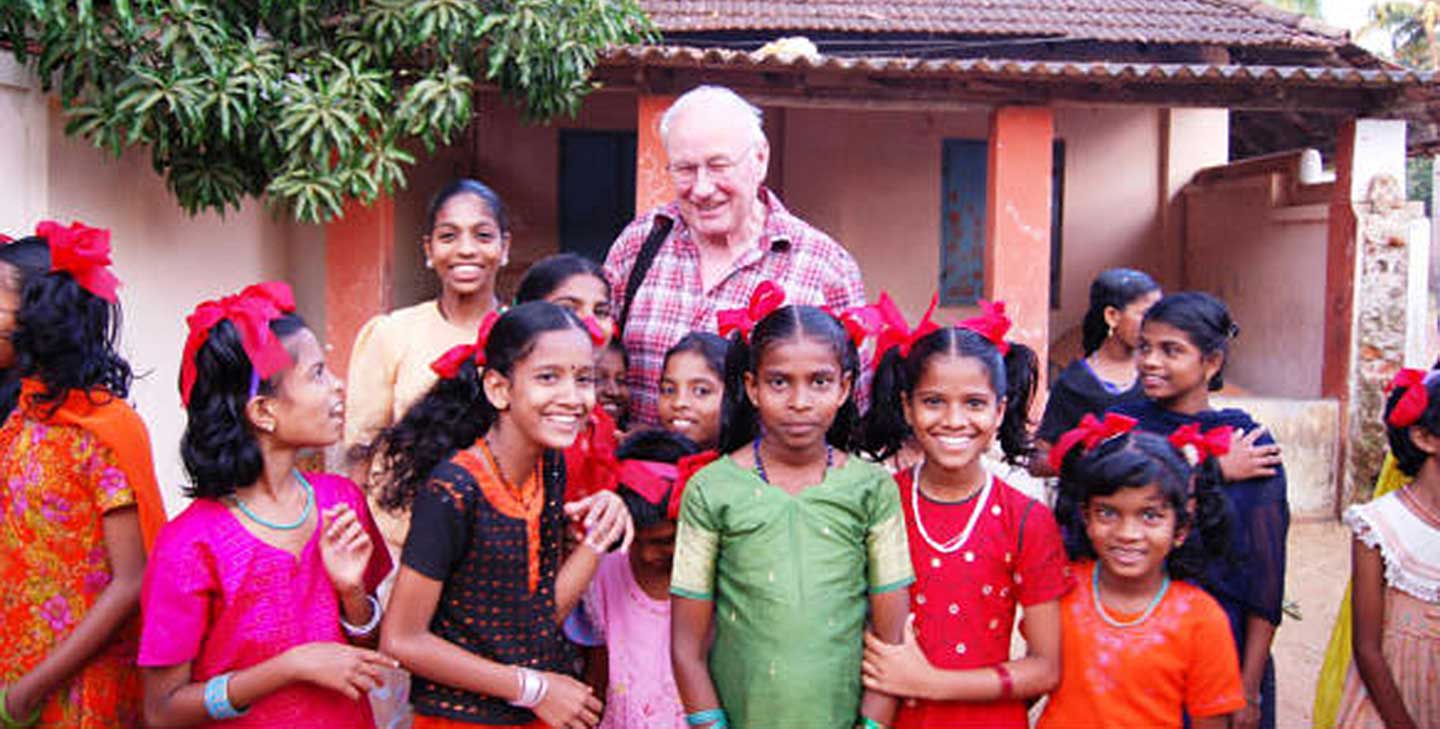 The goal of the non-profit organisation is to reduce poverty and misery in the Third World, with a focus on India. Supporting children, teenagers and young adults in need by providing education, it hopes to contribute to better social conditions and thereby enabling a secure future with a job and income. 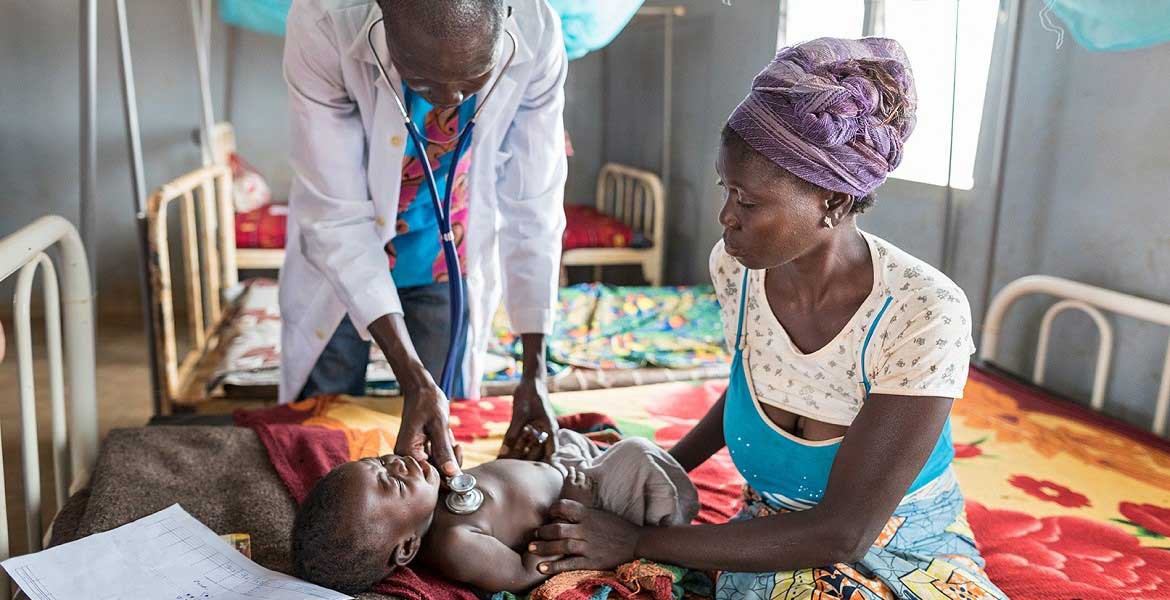 We have supported the society “Cap Anamur – German Emergency Doctors e.V.” with € 6,000.

Cap Anamur provides humanitarian aid globally, often in places where the media interest has long abated. Their activities are focused on medical care and access to education. In war and crisis areas they build structures to improve the lives of people in distress on a sustained basis: they construct and rebuild hospitals and schools, supply construction materials, pharmaceuticals and relief items, and provide training and development for local personnel. 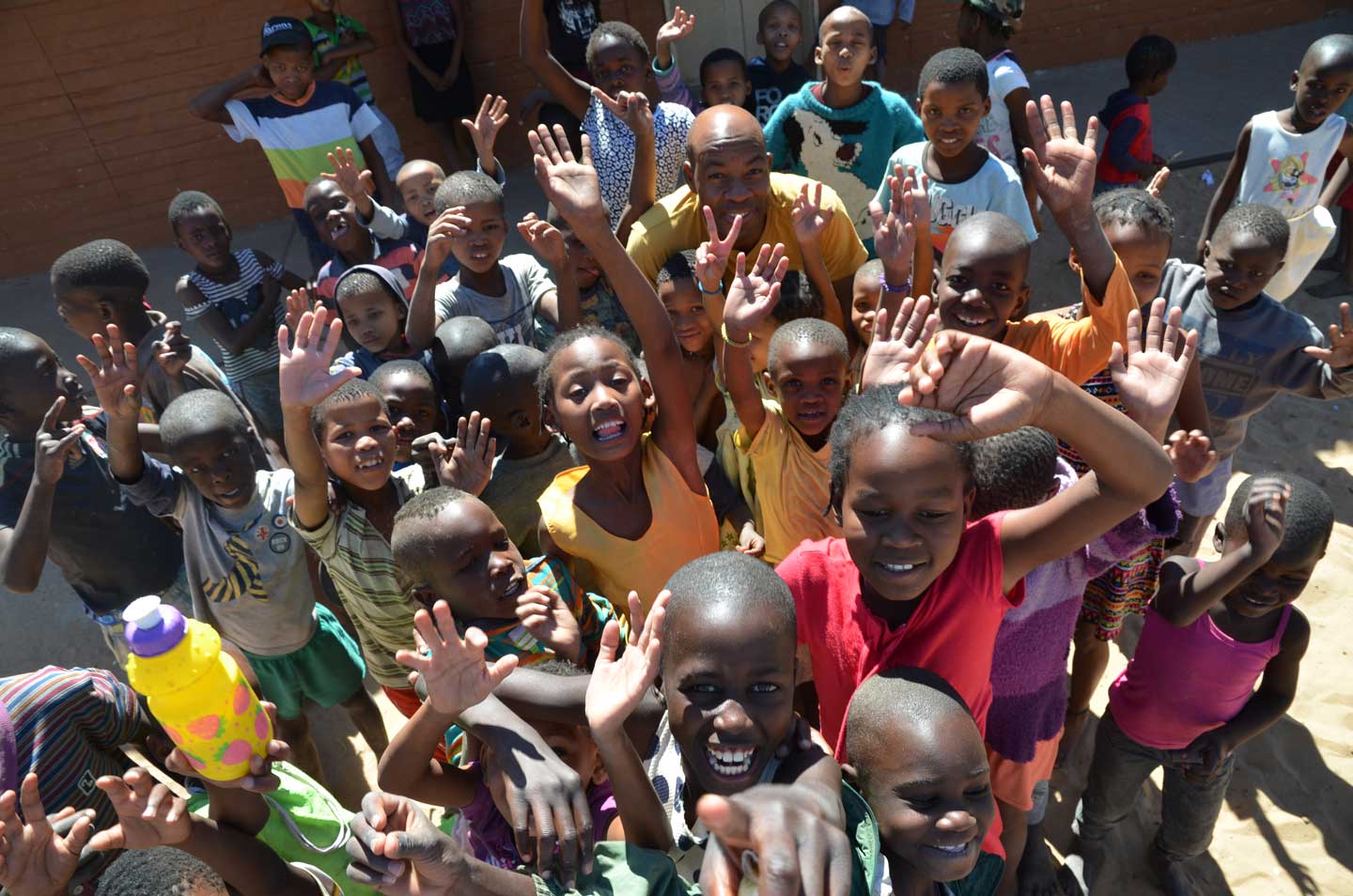 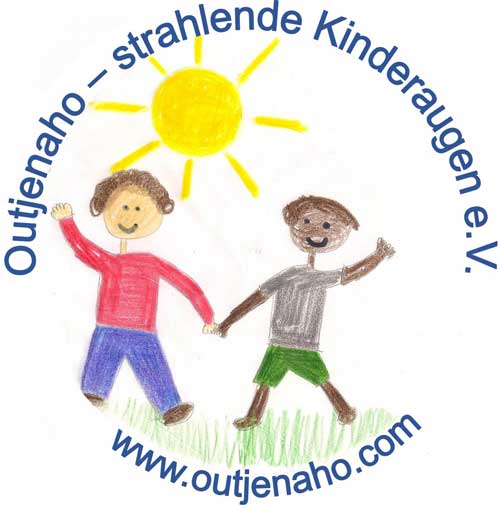 Outjenaho has initialised a school collaboration between the primary school in Ottenhofen and the Morukutu-Primary-School in Namibia. The aim of the project is to support the African school true to the motto – ‘education as the driving force for a better future’. With the help of donations it was possible to purchase school supplies, shoes and clothing. Sanitary facilities were repaired. A fence providing protection against wild animals was built. Fruit deliveries on a regular basis improve the otherwise imbalanced diet (maize porridge). Further projects include the building of a well and also a designated dining area with a roof for the school children. The penpalship and exchange of the pupils from both schools is another important aspect of the project. Insights into each other’s culture are not only informative but also exciting. 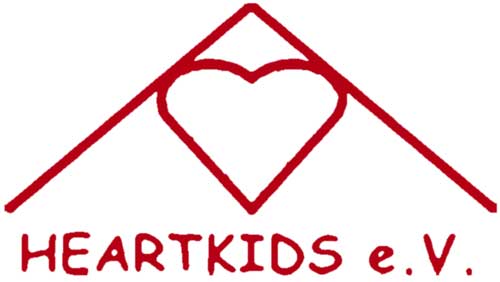 Heartkids e.V. is a non-profit organisation whose support is focused primarily on children and young people in South India. The organisation’s mission is to help people in need who are at a socioeconomic disadvantage due to disabilities, illness, death of family members, homelessness or financial emergencies, for example. The organisation’s founder Judith Retz says, “The love for human beings is the basis of our work – love beyond skin colour, caste or any religion. Out of this love comes a natural compassion for the poorest of the poor, who live in the streets of India under conditions nobody in Europe could possibly imagine.” 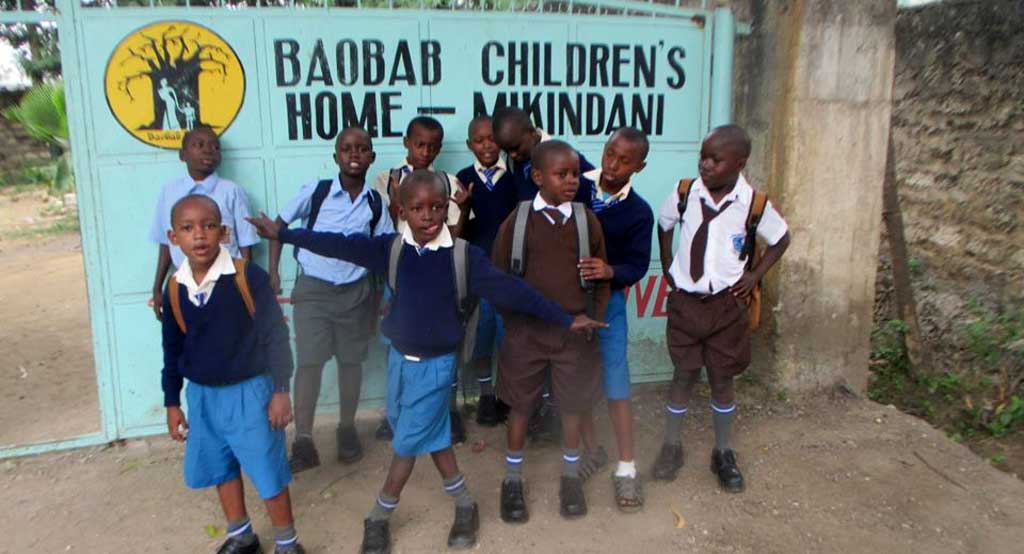 The orphan children’s home in Mikindani (southeast of Kenya) was the first project of the “Baobab Family”. It became the new family for 31 boys who are mostly orphans and street children. These children are now living in the “Baobab Children’s Home” along with Kenyan social workers and are attending school so that they can look forward to an independent future. 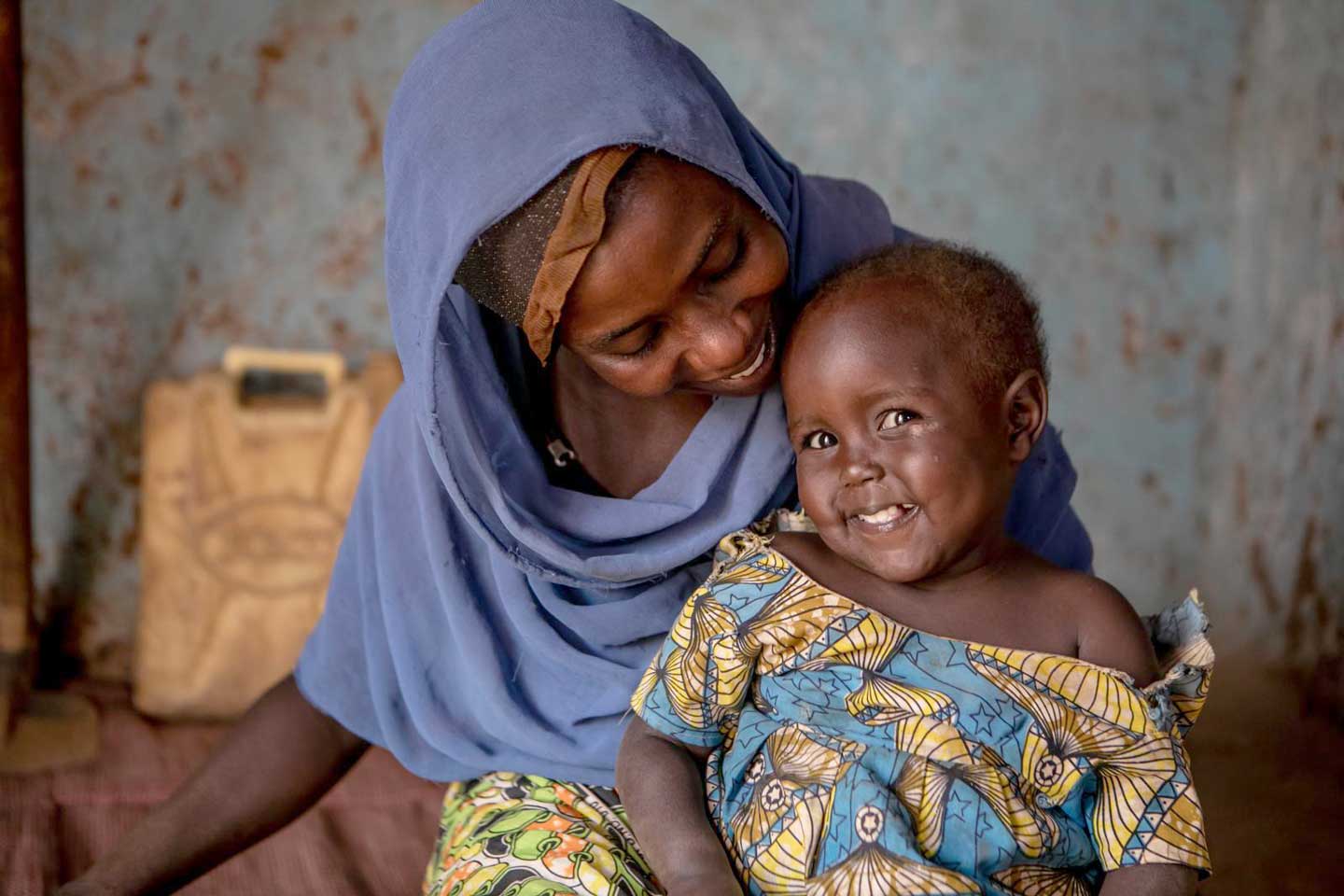 We have donated € 3,000 to UNICEF for AIDS orphans in Mozambique.

In Mozambique, there is hardly a family spared of AIDS: Nearly one in six Mozambicans between the ages of 15 and 49 years is HIV-positive, representing a total of 1.5 million people. More than 500,000 children have already lost their mother or both parents to AIDS, and 35,000 babies are born HIV-positive every year. UNICEF provides support to the communities so that the many orphaned children can be cared for. UNICEF also helps to improve medical care for HIV-positive children, to prevent the transmission of the virus to newborns, and to educate youth. 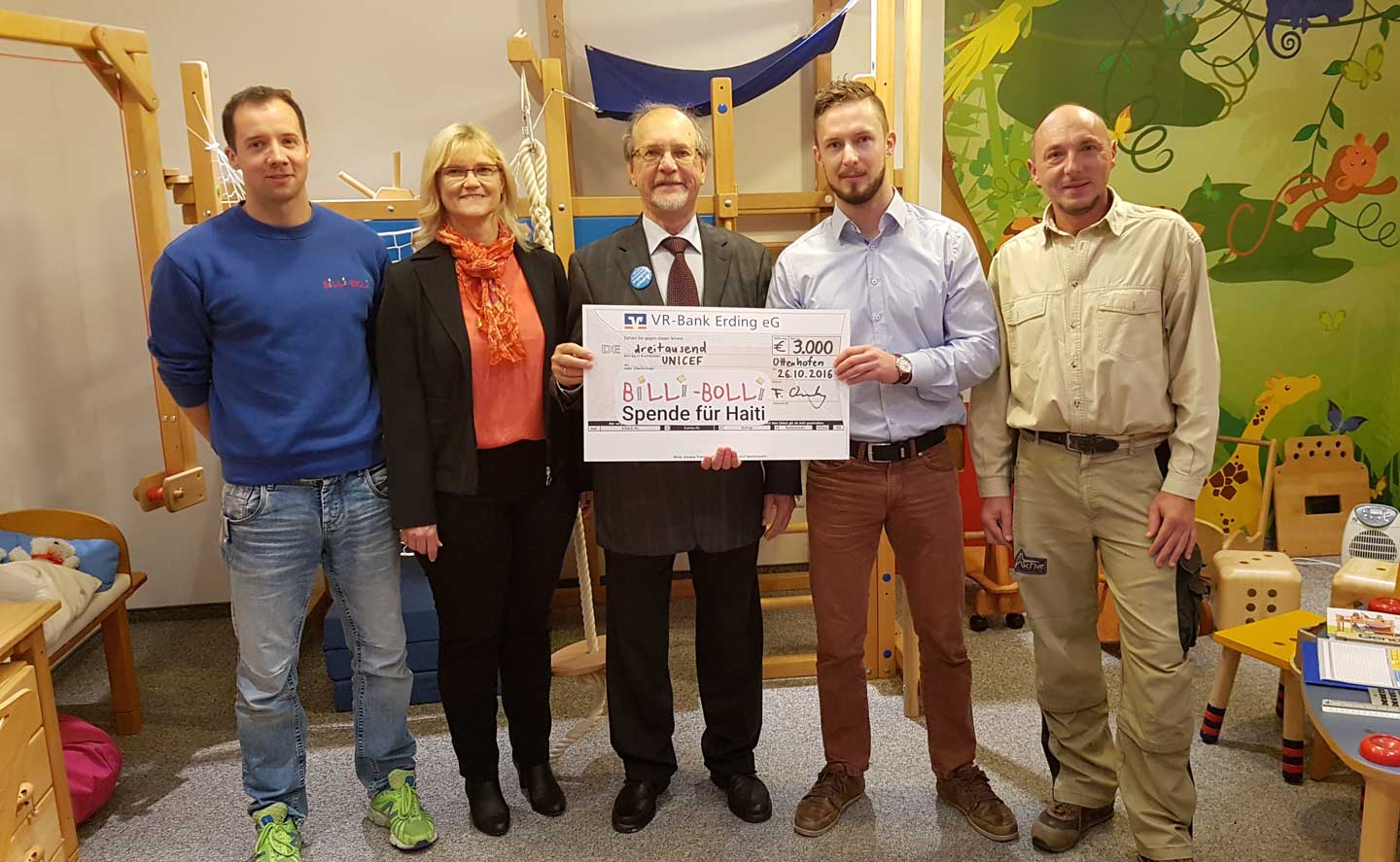 In the wake of Hurricane “Matthew”, we have donated a € 3,000 cheque to UNICEF to help Haiti recover and rebuild.

Another blow for Haiti: similar to the destruction caused by the earthquake in 2010, Hurricane “Matthew” destroyed up to 90 percent of all the buildings. Only a small number of buildings with roofs was left standing, most houses were simply blown away. However, what was left was rendered useless by the flood water. To support the organisation’s rebuilding efforts in Haiti, we handed over a cheque to the UNICEF group in Munich. 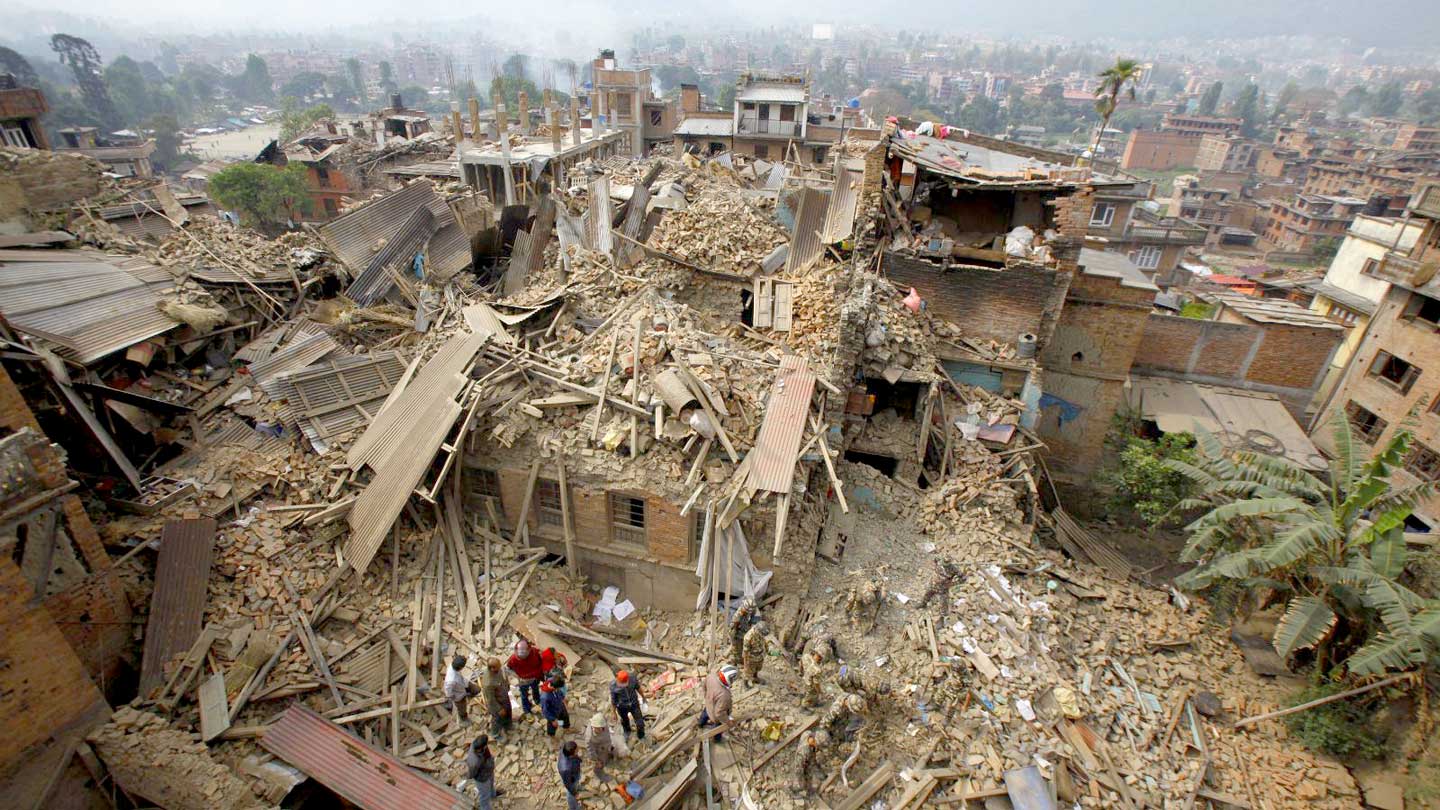 For the victims of the earthquake in Nepal we have donated € 3,000.

The earthquake occurred on 25 April 2015. It is considered the worst in the region in the past 80 years. The authorities estimated more than 10,000 dead. Worst hit was the Kathmandu Valley and nearby valleys, where many people were buried under the rubble of collapsing houses or avalanches. Many people were left homeless, lacking accommodation, food, drinking water and medical aid. Non-governmental organisations from Germany provided emergency aid in the disaster area. 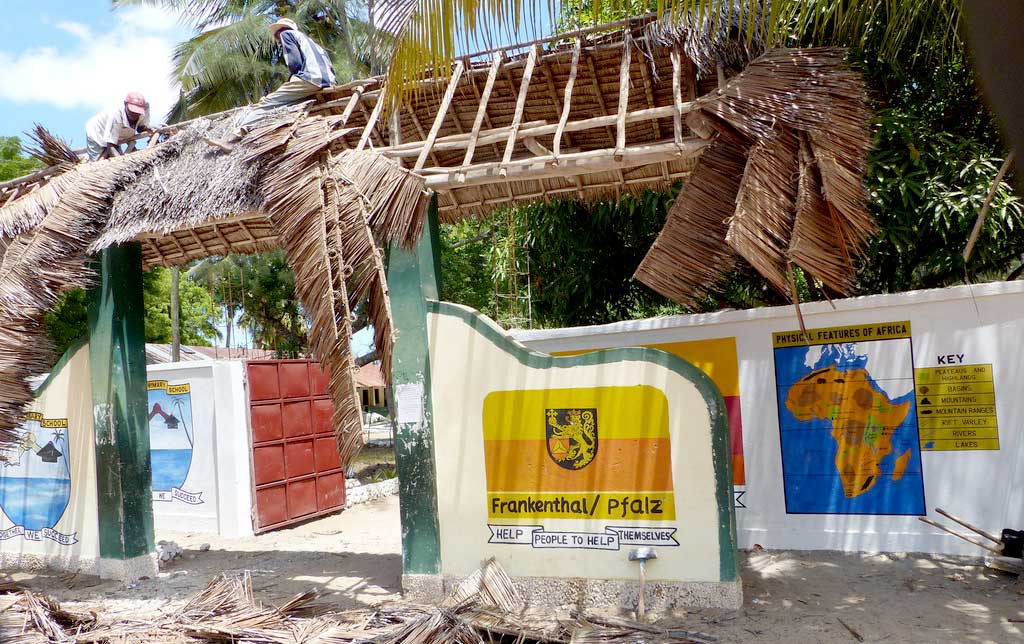 We have transferred € 2,000 to the “Schülerhilfe Kenia Direkt e.V.”

The Zigira Primary School is in the middle of the Kenian bush, close to Ukunda in the area of Mombasa. The school was built and supported by dedicated people in the Pfalz area and all over Germany. Building a few huts in the bush laid the foundation for acceptable learning conditions. The non-profit foundation “Schülerhilfe Kenia Direkt e.V.” focuses on enabling people to help themselves. Families living subsistently from farming are predominantly supported, giving them the opportunity to make a living in the future by giving them access to education and the job market. 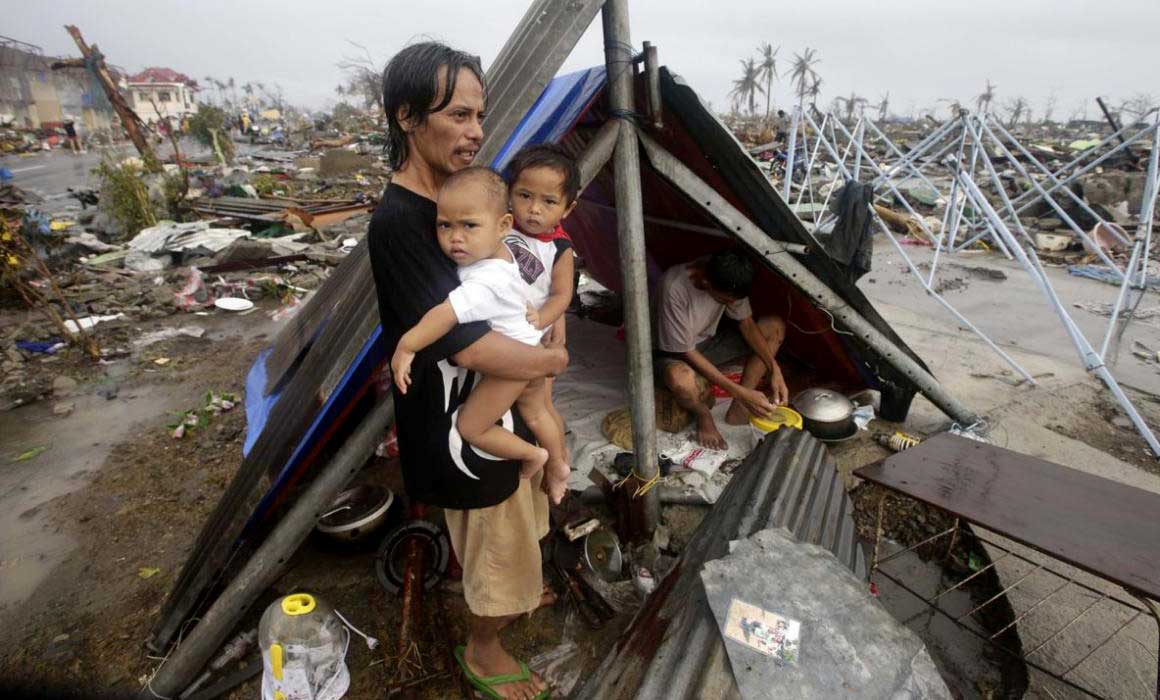 We have donated € 1,000 to victims of the typhoon “Haiyan” in the Philippines.

For the children and their families in the Philippines, it must be a nightmare: one of the strongest typhoons of all time has destroyed their homes and left the people in a desperate situation. The images bring back memories of the tsunami in 2004. Six million children are affected by food shortage, homelessness and water scarcity.

We have also supported other charitable organisations and relief projects with a total of € 41,000.