After 6 years of absolute satisfaction we want to (must) separate from our Billi Bolli bed.

Purchased: September 2002
Bunk bed, 100x 200 cm, honey-coloured oiled
Incl. 2 slatted frames, protective boards for upper floor, handles
2 small shelves
Climbing rope natural hemp, slide
Curtain rod set incl. red curtains
2 bed boxes
1 grid at the lower foot end
1 blue ladder cushion
1 assembly instruction
The bed is 6 years old and well preserved except for slight signs of use.
It is sold without mattresses.
New price: 1600 ,- Euro
Price presentation: 900,- Euro
The bed is still built up so that it can be visited better. At the time of purchase, it can be dismantled by us or by the buyer himself.
Pick-up in Reinbek near Hamburg.

Dear team of Billi Bolli!
Thank you very much for having set our bed on the secondhand side.
We were able to sell it last night. Great service for great beds.
Greetings from Reinbek. 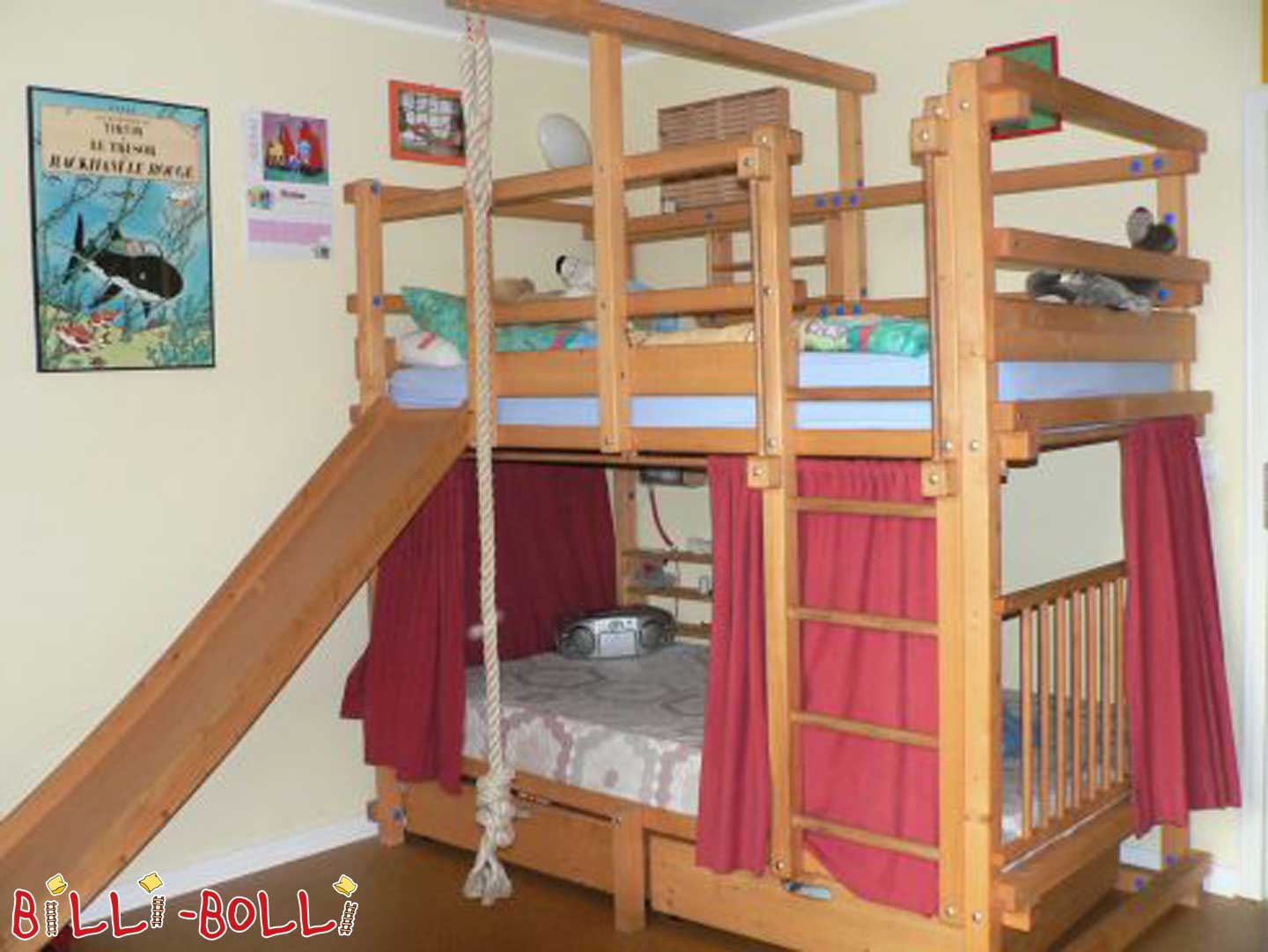 We sell our Gullibo bed with a heavy heart because our daughter is slowly too big for it. There is still a steering wheel as an accessory, which is not on the photo, but available. Then of course the rope and, if necessary, the pink curtains as "Baldachin". In addition, the two large drawers. The bed is used, but in very good condition. Please write that we only sell it for pick-up (construction instructions available).

... our bed was sold within an hour. Incredible the onslaught. 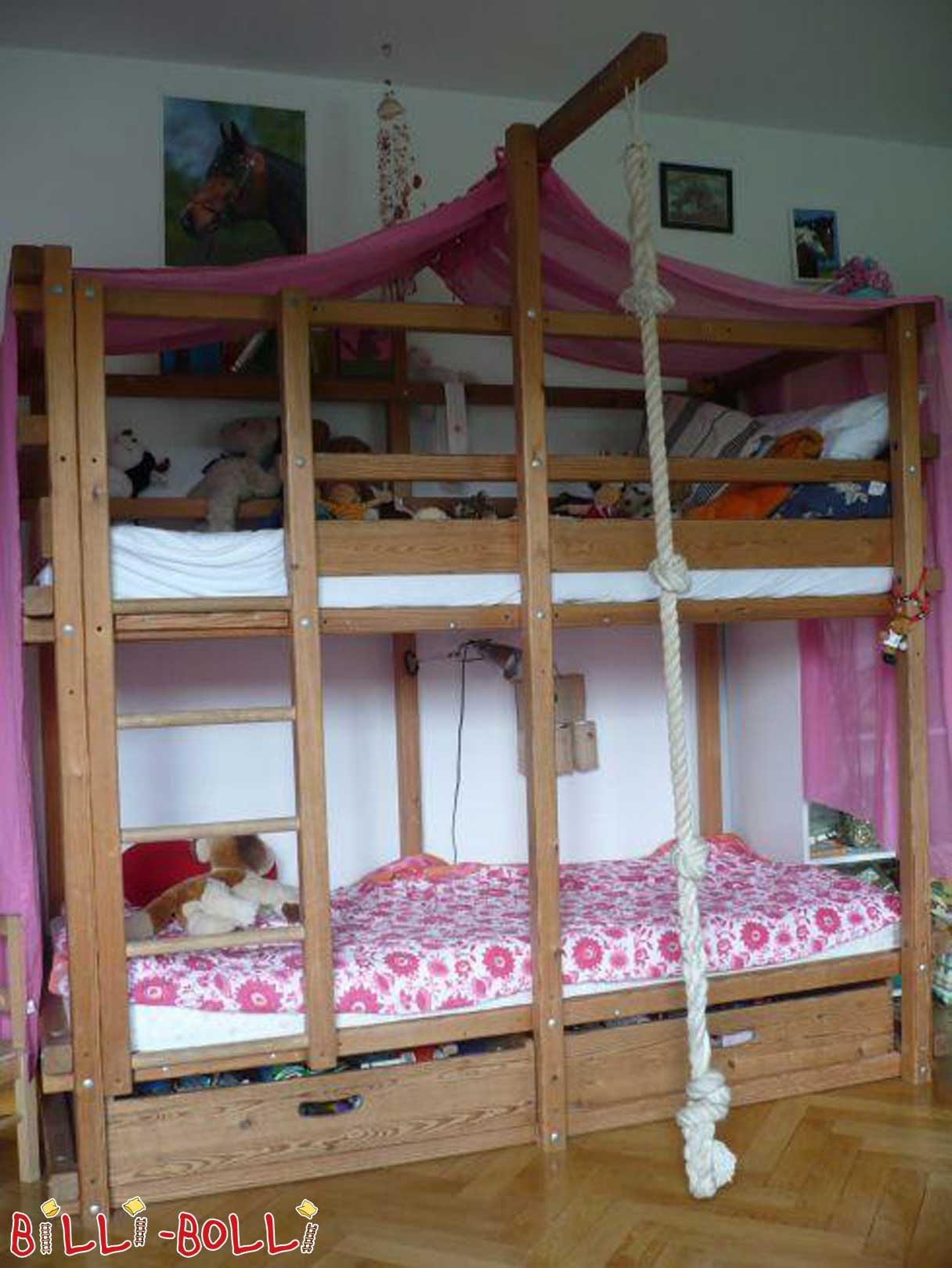 At some point the children are too big...

After about 10 years, we separate from our GULLIBO bed, which can be built very flexibly. This is variant 123 (R), which you can choose from

The upper floor offers the possibility to be set to 2 heights; the bed grows with what your children will thank you...

At the moment it is built "over-right-shifted"; we have rebuilt it 2 times so far due to relocation. Slight traces of use are unavoidable, but it is still in a top condition and actually indestructible.

All original components are supplied, i.e. ladder with handles, 2 bed boxes, slatted frames, "gallows", rope, steering wheel; only the pirate sail (hanging mat) has fallen victim to the storms. The setup instructions for all above-note variants are of course included!

The mattress size is 90 cm x 200 cm; the upper mattress (used only for playing) can be purchased for 25 € if you are interested. The offer itself does not include mattresses, pillows or the like.

The bed is located in Gütersloh and should ideally be dismantled yourself, then the construction may work better (i.e. bring some time). You can also pick it up disassembled. 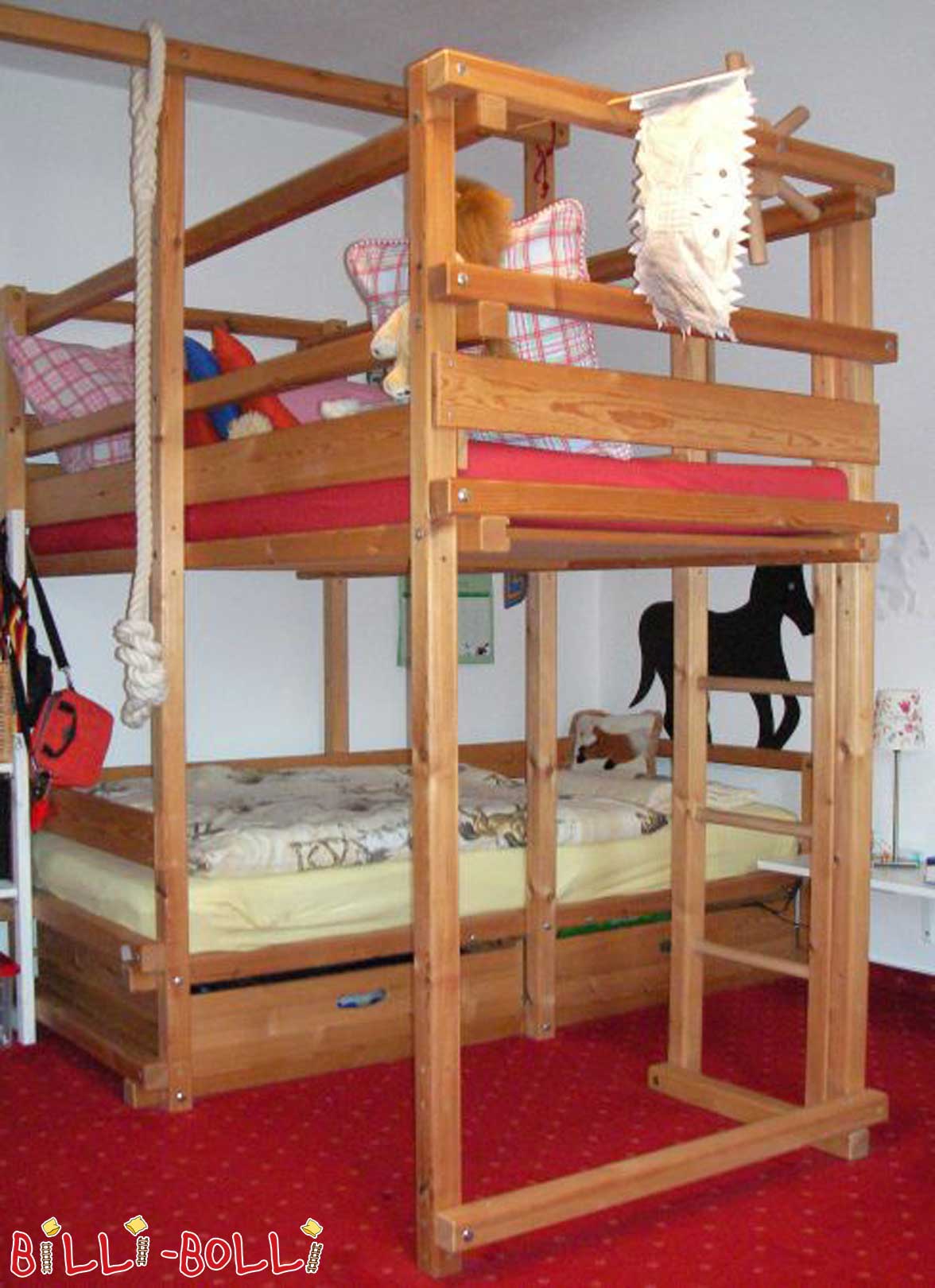 Thank you for setting the baby grid in their secondhand page. the grids were sold today

With a heavy heart we part from our original Gullibo beds!
Originally we had bought two bunk beds plus a slide about 15 years ago, which we then adapted to our room conditions and the growing children. From the lower part of a bunk bed has become a single bed. The rest of the Bettenburg was only housed by our nest-häkchen in the last 8 years.

For the conversion we had bought original parts as well as six baby grilles from the company Gullibo.

One photo shows the single bed with the bed drawers.

On the other side you can see on the left a complete bunk bed with the bed drawers, the rope, the additional slide and two of the grids. Since we had not mounted the sail at the moment, I only put it over the beam for the photo. To the right over corner we have - ATTENTION - the upper part of the second bunk bed attached to approx. 150cm SHORTENED.

The beds can of course also be set up differently. If, for example, you still have space in the children's room to the right of the attached plateau, you can insert the single bed offset down (for this the ladder would have to be mounted on the left).
The complete bunk bed can also be set up over corner or offset and provided with more grids.
Of course, the single bed with the shortened upper floor could also stand separately from the bunk bed etc...

On the condition: The beds are sold without mattresses. They were oiled/waxed with organic products. The inlay boards are darkened to varying degrees in the bunk bed and the attached part, as mattresses were not always everywhere. There are the usual signs of use, some scratches and dents, but no stickers/paints. The slide has large scrapes (see photo). In the rear vertical beams of the attachment area there are some small holes of fittings at the bottom, as we had mounted a bookshelf there. Likewise at the protective border of the bunk bed below, there were two hinges for a board.
The two beams (long + medium) not used in this type of bunk bed structure and the protective board are available. The sail for the second bed unfortunately not. However, I kept the original checkered cover of a mattress so that a second sail or something else could be made from it. There are three more medium and a short bar, various screws as well as the second climbing rope and the construction instructions.

All in all, the beds are in a well-maintained condition and can certainly bring great joy to several children!

You can visit in Berlin-Heiligensee, near s-s- and motorway exit 'Schulzendorf' before purchase. We can dismantle them together - then the set-up will be easier - or there will be a transport-friendly dismantling on our part in advance.

We only sell the beds together. Total price: 900 Euro.

The beds were already bought the next day (17.9.) and there were several interested parties. So that we no longer have to disappoint anyone, I ask you to add a 'sold' to the ad. Thank you!

-untreated
- 2 bed boxes
- 2 slatted frames
- 2 mattress savers
- Steering wheel (not seen in the picture, since lately no longer current)
- Climbing rope (also not in the picture)

The bed has traces of usage, but these can be repaired with little effort and is delivered without mattresses

The bed is available in Frankfurt am Main for (joint) dismantling and pick-up.

Dear Billi-Bolli Team!
Yesterday you put our Billi-Bolli bed on your secondhand page, this morning it was sold, dismantled and removed - hard to believe but true! Thank you very much!
Regards
Family Shaikh-Yousef 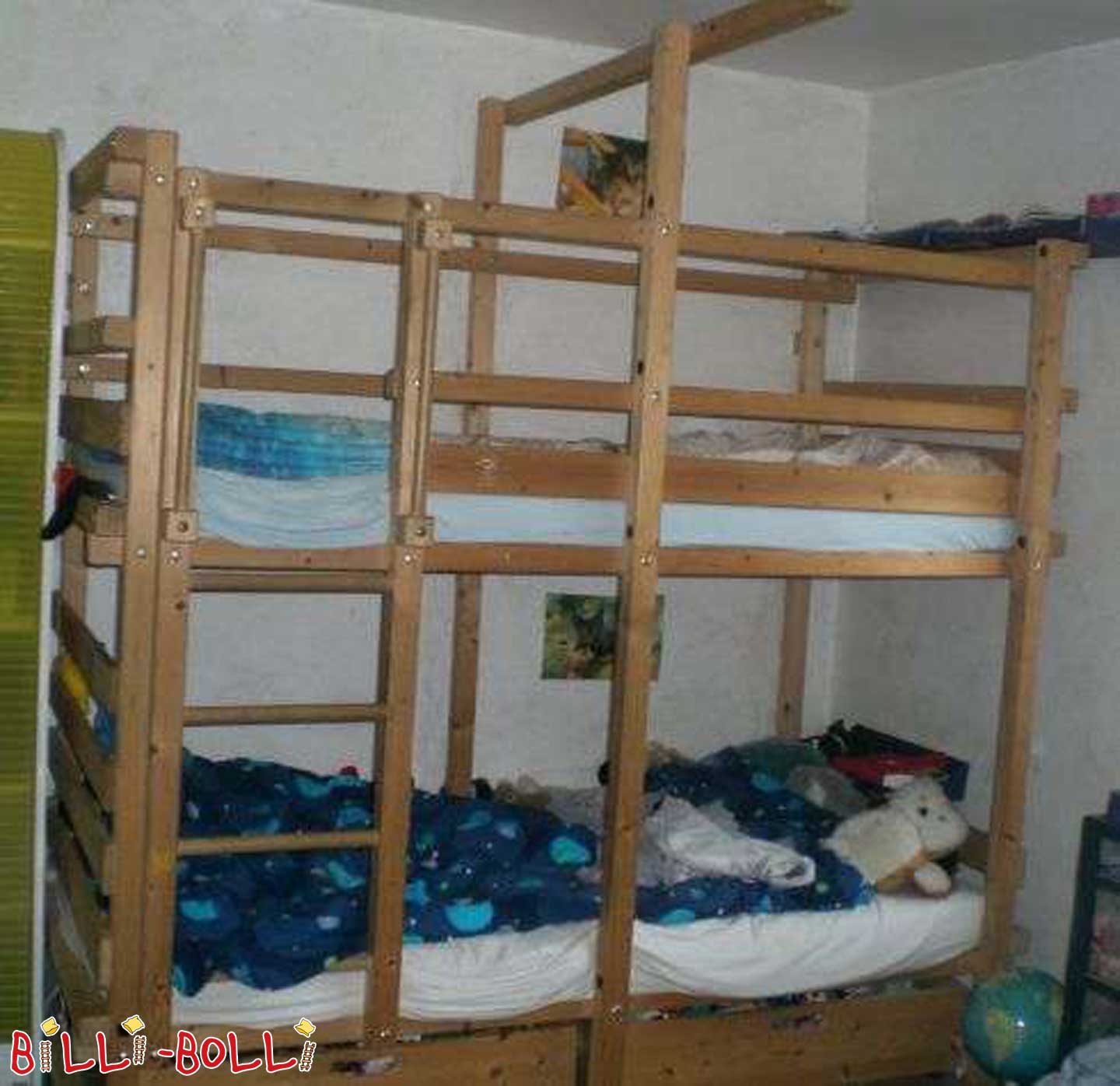 Bed is in very good condition (non-smoking household), can be screwed to the wall (but we do not have, is also so extremely stable).

On request, we can also sell the high-quality natural latex mattress with double-sided virgin wool 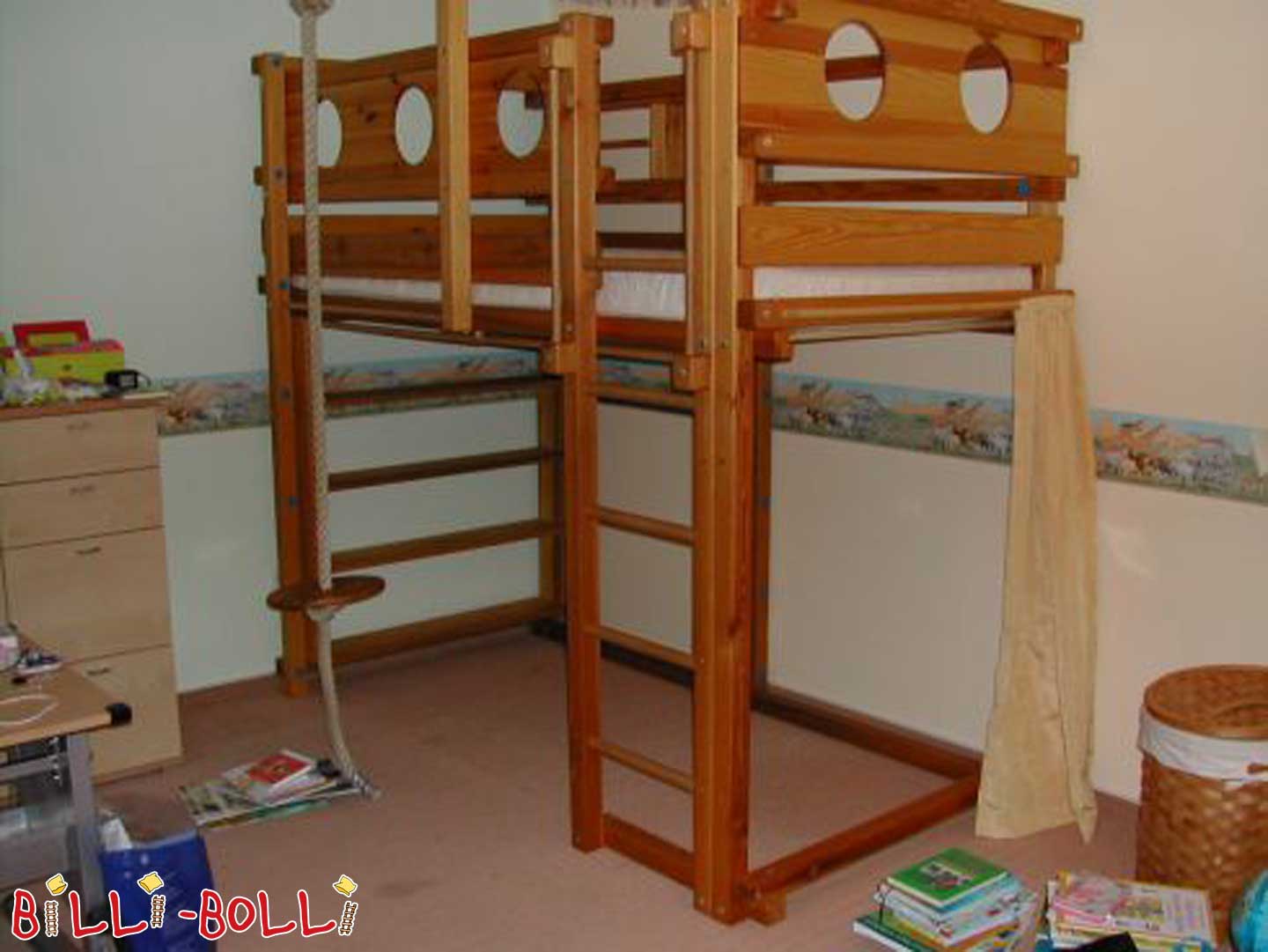 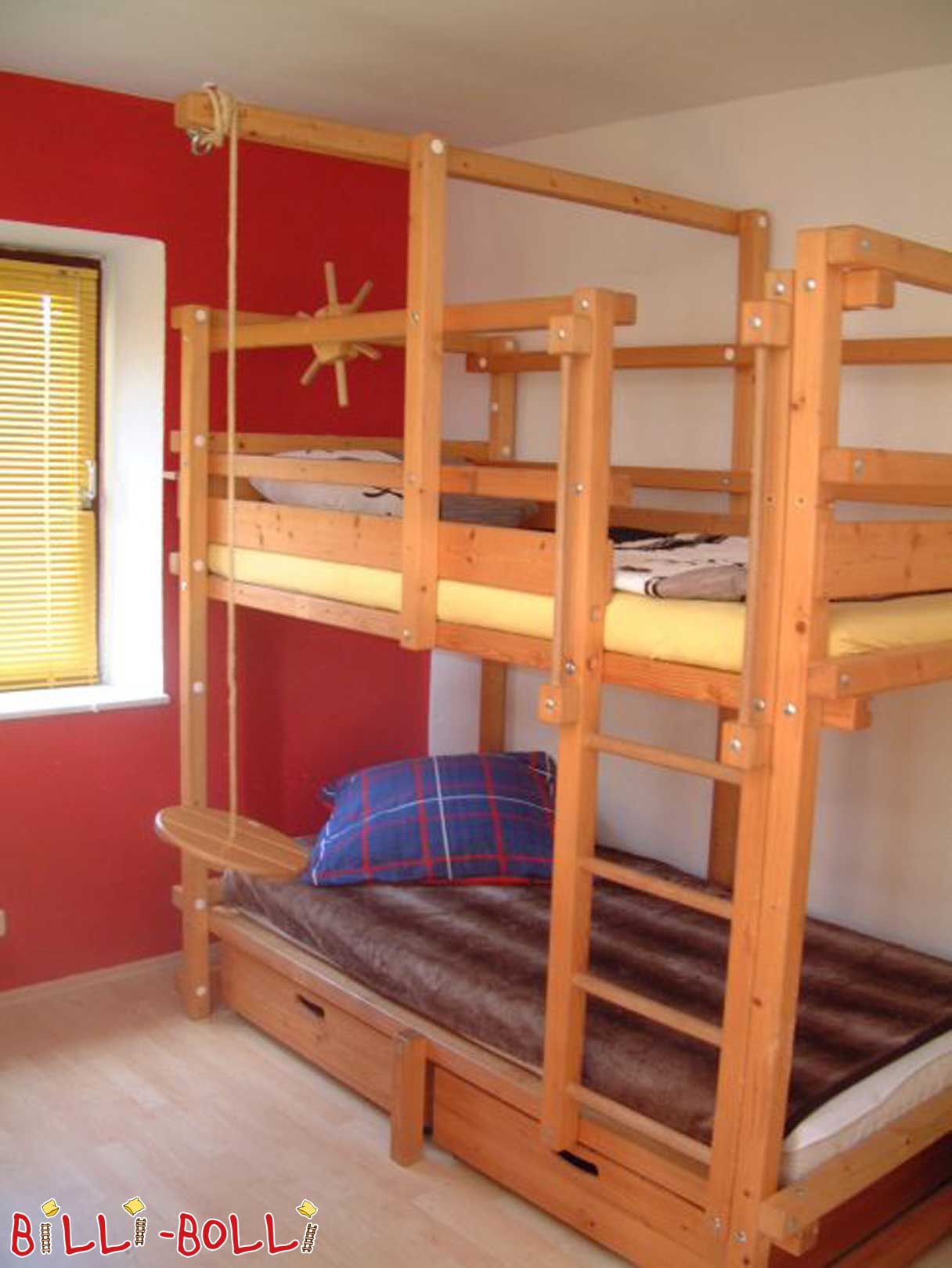 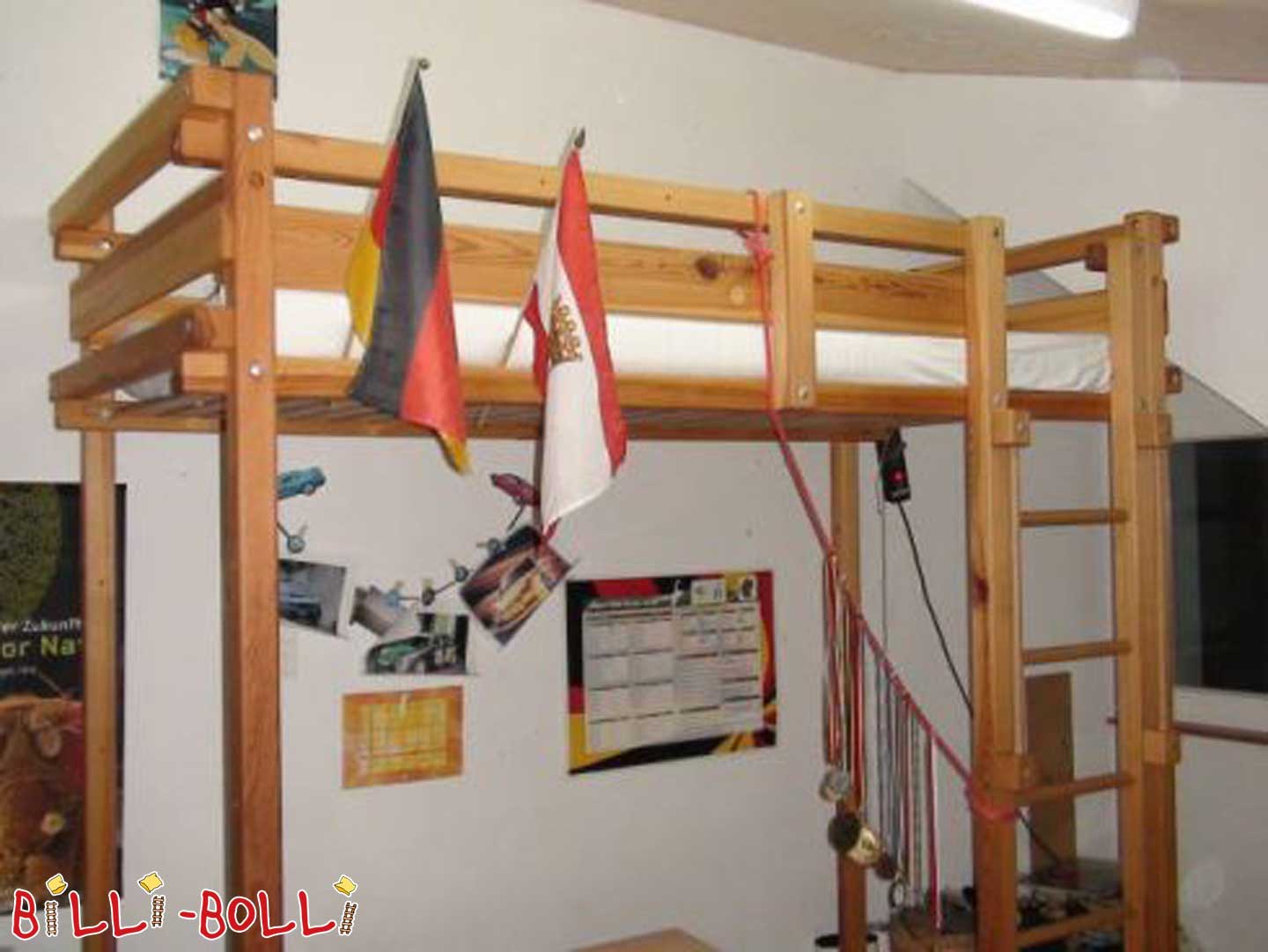 Our girls grow up and we part with a heavy heart from the beloved Billi-Bolli!

The bed (jaw oiled) consists of

The bed was bought in October 2004 and is in good condition.
It can be picked up at our home in Munich. A setup instruction as well as invoice etc. are available. 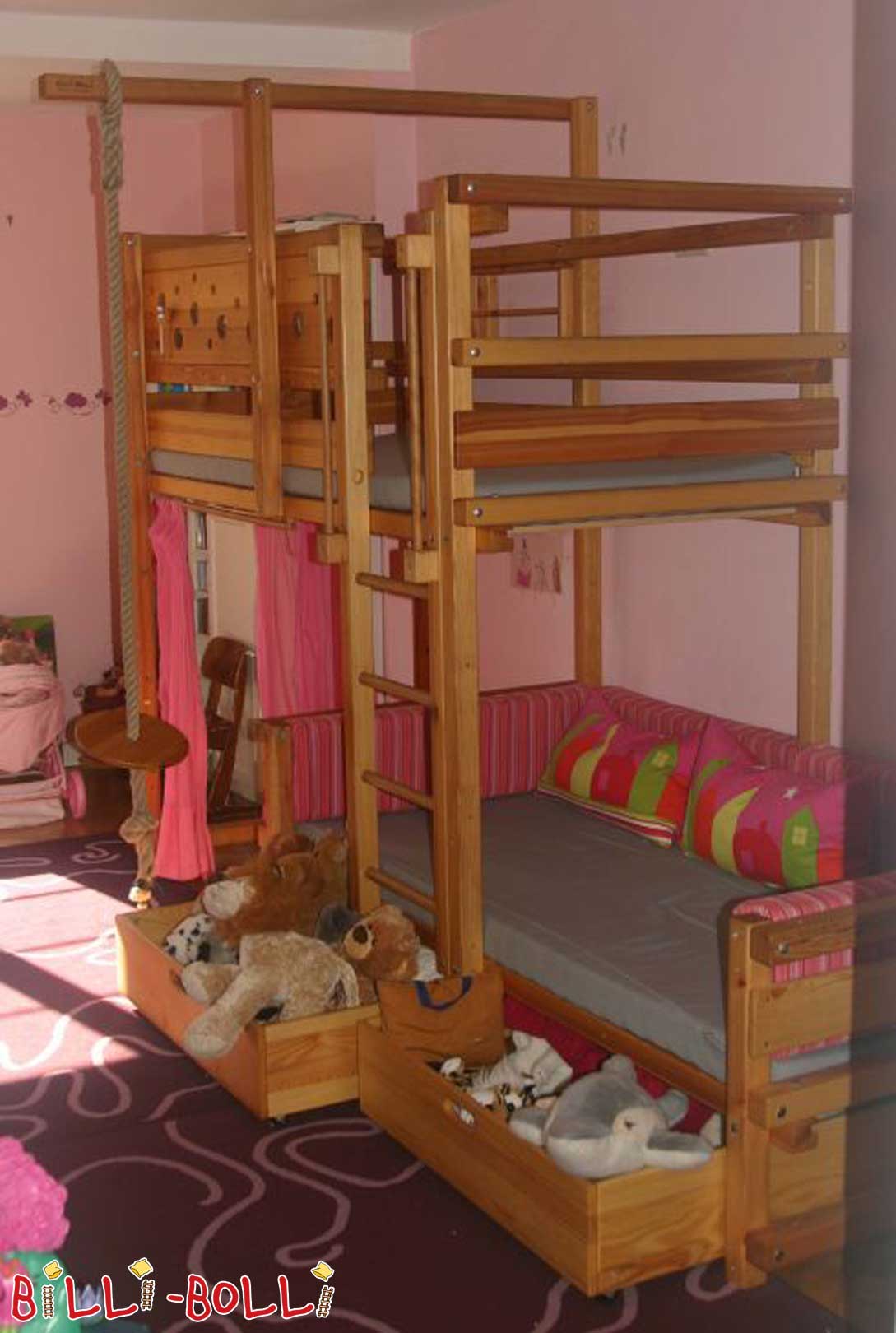 You have been searching patiently for a while now but to no avail?

Have you already considered buying a new Billi-Bolli bed instead? When you no longer need it, you too can use our successful Secondhand Page, completely free of charge. Thanks to the high resale value of our beds, you will get a good return on your purchase even after many years of use. For this reason, a new Billi-Bolli bed is, economically speaking, a very good investment.